Theobald’s short, sad adult life is notorious for a terrible accident and a nine-year obsession. In April 1966, when working as a model at the 11th International Automobile Show in New York, she was mauled by the lion she was posing with at the BMW stand. In 1971 a jury awarded her $500,000 in damages.

From 1968, she obsessively stalked famous opera singer Birgit Nilsson, following her around the world, bribing her way into parties and stealing mementoes. In 1977, when her money ran out, Theobald attempted suicide in a hotel room next door to Nilsson’s in Vienna. A few months later, Theobald died alone in the Skyway Motel Astoria Queens from an overdose. 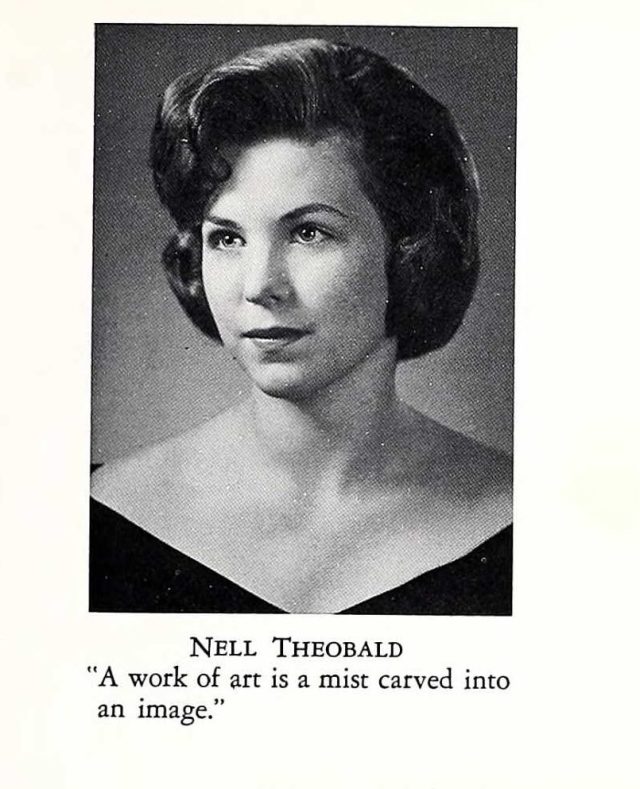 The Wagnerian soprano who fell prey to a stalker

LIKE CHOCOLATE or Formula One, opera is one of those things in life that drives its devotees to extremes of fanaticism. So it’s no surprise that its annals are full of tales of obsessive stalkers, worshipping the stars beyond all reason. But I don’t think I’ve ever encountered a sadder or odder instance of the phenomenon than the story told by Kathryn Leigh Scott in this month’s edition of the American magazine Opera News.

In the early 1960s, Nell Theobald was a young woman from a good Southern family, who came to New York to try her luck. Pretty, fun and clever, she had flings with the likes of Sid Luft and Johnny Carson, and earned money by taking hostessing and modelling jobs. But her nemesis came early, when she agreed to pose with a somnolent lion for a BMW motor show. The lion woke up and went crazy, gnawing her thigh to the bone and causing her horrific injuries. A long, bitter and highly publicised lawsuit followed and Nell’s mental equilibrium never recovered.

She became a two-bit actress, but opera was her dream. She took lessons, and seems to have nursed aspirations to become a glamorous lyric soprano like Lily Pons or Anna Moffo. But then she heard the great Swedish Wagnerian Birgit Nilsson sing Isolde at the Met. The infatuation that ensued couldn’t be described as overtly sexual; Nell wasn’t a lesbian, and Nilsson offstage was a dumpy, hearty creature, firmly married and of no obvious romantic allure.

Nilsson’s behaviour was impeccable. Civil and friendly to Nell at first, she soon laid it to her straight; you’re not my friend and you never will be, please stay away and leave me alone. But Nell was unstoppable, fuelling her passion with the damages she’d been awarded for the goring. She trailed Nilsson round the world, listening to her obsessively and attending all her performances. She gained access to her schedule by pretending she was the diva’s personal assistant and persuading her friends that she was her intimate. She also stole a lot, bribing chambermaids to let her invade hotel rooms and pocket mementoes, lingerie and jewellery, which she then passed off as presents that Nilsson had made her.

After 10 years, Nell’s funds ran out and in 1977 she committed suicide.

Hundreds of letters forged on Nilsson’s letterhead were found in her apartment, purportedly written by Nilsson to Nell, the handwriting impeccably imitated and Nilsson’s characteristic slips in English incorporated.

It’s a poignant human story, as well as a case study in the peculiar psychology of stalking – Nell seems to have been more besotted by Nilsson’s voice (exacerbated, perhaps by the intoxicating poison of Wagner’s music) than her physical appearance or personality.