A ‘Warhol Superstar,’ Feldman appeared in Andy Warhol’s Imitation of Christ (1967) and Paul Morrissey’s Trash (1970) and Heat (1972), receiving good reviews for her performance in the latter as the daughter of a faded Hollywood star, played by Sylvia Miles.

Feldman committed suicide by jumping out of a window of the 14th floor apartment where she lived at 51 Fifth Avenue, holding either “a rosary and a can of coke” or “a bible and a crucifix.” She left a note recording how Warhol and Morrissey exploited and abused her. Heat was released a month after her death. 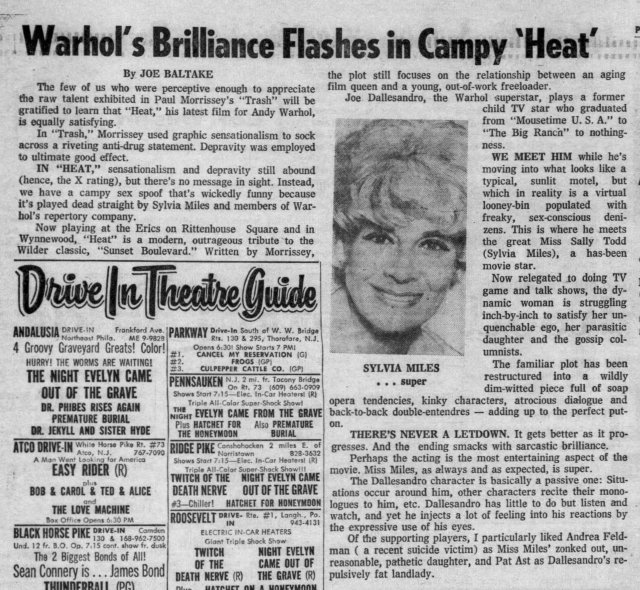 ANDREA FELDMAN, who appeared in Imitation of Christ, Trash and Heat, committed suicide by jumping out of the window of the apartment she lived in with her family on the fourteenth floor of a building at Fifth Avenue and 12th Street, holding a Bible and a crucifix. Andy did not go to the funeral.

According to Bob Colacello, Andrea Feldman was carrying a can of coke in one hand and a rosary in the other when she jumped from 51 Fifth Avenue. Many factory employees thought August 8th was Warhol’s birth date at the time – Andrea may have chosen this date because she assumed it was his birthday. It was also the tenth anniversary of MARILYN MONROE’s death with whom Andrea identified herself.

Andrea had “apparently made dates for that afternoon with half a dozen guys she had gone out with, including the poet and diarist JIM CARROLL, so that they would all be down on the sidewalk when she flew out the window.”

Andrea Feldman’s best friend and Warhol superstar, GERALDINE SMITH, mentioned a note that Feldman had left telling everyone she loved them and that she was ‘going for the big time, I hit the jackpot!’

But, according to Bob Colacello, “in the back room of Max’s the old Superstars were saying that… the note wasn’t to everyone and it wasn’t about love; it was to Andy and it was very, very nasty.”

Andrea Feldman’s last interview was conducted on July 29, 1972 by Greg Ford who submitted it to Interview magazine. In regard to her filming by Andy Warhol and Paul Morrissey, she said:

“They just throw you in front of a camera – they don’t care what you look like. And they just use you, and abuse you, and step on you, and they don’t pay you anything. I am very depressed about the whole thing, because I know I’m a damn good actress and I’ve been brought down by Warhol and I’ve been mistreated by them. And Paul Morrissey told me I was the best actress he ever had.”